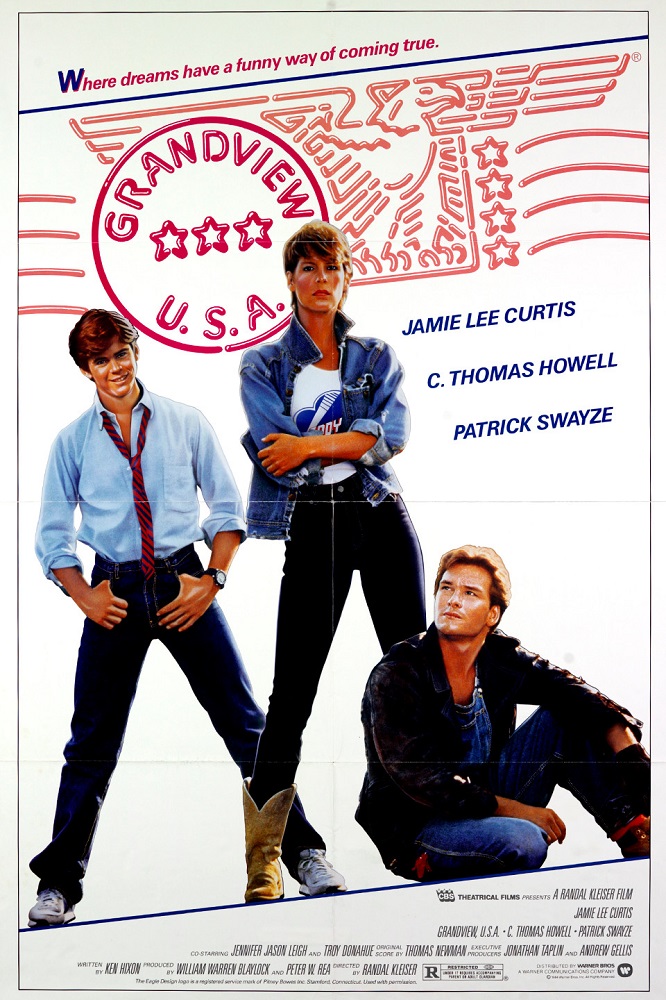 With only a week left before graduation, a young dreamer itches to renounce an uninspiring scholarship, stand up to his despotic father and pursue a career in oceanography. But, has anyone ever spread his wings away from Grandview, U.S.A.?

Eighteen-year-old Tim Pearson, a soon-to-be graduate of Grandview High School, wants to go to Florida to study oceanography. Tim’s father, Roger Pearson, loans Tim his brand new Cadillac to go to the Prom with his date Bonnie Clark. Later, while parked near a stream, Tim and Bonnie are making out in the Cadillac, when they feel the car moving, only to discover that the car is falling into the stream. Tim and Bonnie walk to “Cody’s Speedway” to get a tow truck, Bonnie calls her father, who is so angry about the accident that he punches Tim. Mechanic Michelle “Mike” Cody comes to Tim’s defense, and has Ernie “Slam” Webster, a local demolition derby driver, tow the car, taking Tim along. Slam stops at the bowling alley to see if his wife Candy had been there, but she wasn’t, hinting that she may be cheating on him.

The next morning, Tim goes to see his father at his office. He talks to Tim and hints to him that he does not want Tim to drive his car again. Tim runs into Mike and thanks her for helping him with the car and says that he wants to drive in the derby.

Tim goes out to the Speedway, where he meets Mike’s mentally challenged brother, Cowboy. Later on that night, Mike goes to the bar to see her uncle, Bob Cody, and asks if she can borrow $10,000, so she can fix up the Speedway. Bob doesn’t have that kind of money, but wants to help her. Just then, they both hear a drunken Slam beating on a video game. Mike and Bob help Slam out to his truck. Mike and Slam talk about old times they had together.

Slam is at work the next morning, hungover, but his boss tells him to go home. Slam gets home and sees his wife Candy with another man, Donny. Enraged, he jumps on the lover’s car demanding that Candy come back to him; in the ensuing struggle, Donny accidentally shoots himself in the foot. At the hospital, Candy declines to press charges, but refuses to come home with him. Slam later learns that Candy has filed a restraining order against him and that he cannot be within 50 feet of her.

That night, Mike sees Slam sleeping in his truck. Mike tries to comfort him, believing that he does not really love Candy, and is simply afraid of being alone. Later that day, Slam comes back and asks Mike if she wants to go out for dinner, but she tells him that she can’t. (She has to go to a County Commission meeting, but doesn’t mention that to Slam).

Tim and his dad go the same meeting, and Tim tells Roger that he wants to decline his scholarship to ISU and go to Florida instead so that he can study oceanography; Roger is not too happy with his decision. At the Town Hall, Roger asks Tim to go to his office and get his Rolaids. In the office, Tim sees plans for the Speedway renovation on his dad’s desk. At the meeting, Mike asks the commission for more time to come up with the money to fix up the Speedway, but the commission won’t give it to her. Tim comes in and reveals what they have planned: they want to put a country club and golf course on Mike’s land. (Roger has already bought all of the adjacent property to the Speedway and will go bankrupt if the deal doesn’t go through.) Tim then gets into an argument with his father and leaves. He runs into Mike, who thanks him for saving her place. They both go for a hamburger at the local restaurant, and Mike invites Tim to her house, where they spend the night together. Mike asks Tim if he still wants to drive in the Derby, she gives him a car to drive. In the morning, Slam shows up at the door and discovers them in bed together; he leaves, upset, thinking that the reason that Mike declined his dinner offer was because she had a night planned with Tim.

Later on that day, Roger sees Tim near the stream, and says he is sorry about the fight. He asks Tim to give Illinois State University a chance, but Tim still wants to go to Florida.

At the Speedway, Mike sells her old cars to make extra money; this upsets Cowboy, who runs off crying.

Slam goes to his house and sees his stuff on the lawn, getting wet under the lawn sprinkler. Donny stands by the door with a shotgun and taunts Slam, telling him he called the cops. Slam gets his wet things and leaves.

Later that night, the Demolition Derby is going on, and Tim is in the race, competing against Slam. At the race’s climax, Slam crashes into Tim, and Tim is injured. Mike is mad because she thinks Slam did it on purpose, and tells him to leave the track.

Later that night, Candy and Donny are having sex in Slam’s house when, suddenly, Slam appears on a bulldozer and knocks the walls down. The cops arrest Slam.

As Tim and Mike drive home from the hospital, they see firetrucks passing by, and discover that the Speedway has burned down. Mike asks her mother what had happened, and she says it just started up. In the morning, however, the police discover that the gas tank was unlocked. It is eventually revealed that Cowboy started the fire because Mike sold the old cars. Tim and Mike talk, and she admits she is in love with Slam.

Mike goes to bail Slam out from jail. He offers to help fix the Speedway, but Mike says she will sell the land to Roger Pearson; that way, they can afford to start a life together. Mike asks Slam for a favor.

Tim is on his way to Chicago, with his family in tow to say goodbye. The bus leaves and a car is driving by the side of the bus; it is Slam, who gives Tim the old car and money for his trip to Florida. Mike and Slam, now a couple, go to the town’s parade.

• Lives meet. Hearts crush.
• Where dreams have a funny way of coming true.

→ Patrick Swayze’s song She’s Like the Wind was originally written by him as a love theme for his and Jamie Lee Curtis’s characters, but it was scrapped due to the comedic and somewhat raunchy nature of the film. It would eventually be used three years later in Swayze’s film Dirty Dancing.