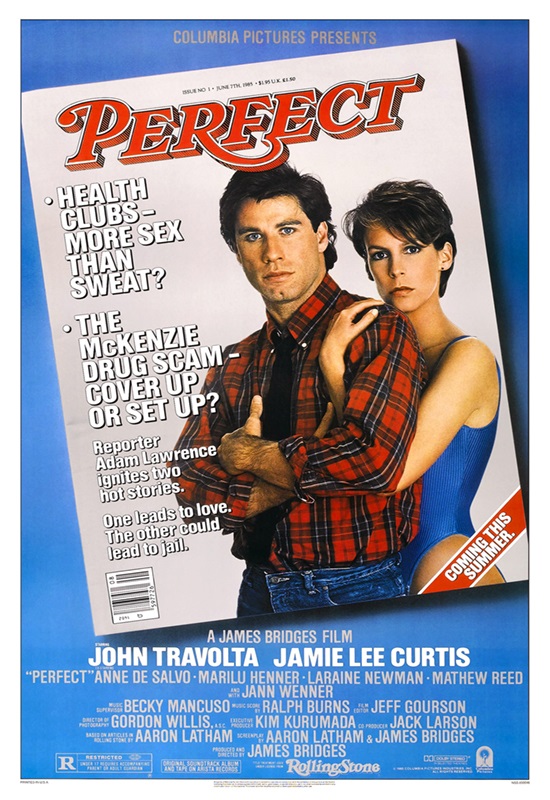 A female aerobics instructor meets a male reporter doing a story on health clubs, but it isn't love at first sight.

Rolling Stone reporter Adam Lawrence (John Travolta) is sent from New York to Los Angeles to write an article about a businessman arrested for dealing drugs. During his stay in L.A., Adam sees a chance to collect material for another story about how “Fitness clubs are the singles bars of the ’80s”. He visits “The Sport Connection,” a popular gym where he meets workout instructor Jessie Wilson (Jamie Lee Curtis) and asks her for an interview. Because of a previous bad experience with the press when she was a competitive swimmer, Jessie declines.

Adam joins the fitness club and soon coaxes other club members to tell him about the gym and its impact on their love lives. Some, such as fun-loving Linda and Sally, are all too candid about their experiences with the opposite sex. Although she doesn’t agree to be a part of his story, a romance does ultimately develop between Jessie and Adam, resulting in a moral dilemma; as a journalist he has lost his objective point of view.

Jessie comes to trust him. Less cynical than before, Adam makes a concerted effort to show Jessie that not all journalists are out for the cheap sensation. He writes an in-depth, fair-minded analysis of fitness clubs as a singles meeting scene. But it is deemed unacceptable by his boss, Rolling Stone’s editor in chief Mark Roth (Jann Wenner).

Adam’s article is turned over to others for editing, using material supplied by his colleague Frankie, a photographer. She finds an old magazine article featuring embarrassing details about a romance involving Jessie. Adam travels to Morocco for another assignment, unaware of the changes being made in his story; he finds out too late to stop it. This has devastating impact on Jessie, as well as on others like Sally and Linda, described as “the most used piece of equipment in the gym.”

Adam tries to explain the whole situation to Jessie, but can’t. Meanwhile, he must attend a trial at which he’s supposed to testify. As a reporter, using rights granted by the First Amendment, he decides not to comply with a judge who orders Adam to hand over tapes from the businessman’s interview. Adam is jailed for contempt of court.

Jessie can see that Adam is a man of his word and believes him that he did not write the article the way it appeared in Rolling Stone.

• John Travolta and Jamie Lee Curtis work up a sweat together!
• Health Clubs – More Sex Than Sweat?
• Where love is a dance and beauty is everything.
• Hot Bodies. High Energy. Cool Music.
• Reporter Adam Lawrence ignites two hot stories. One leads to love. The other could lead to jail.
• The perfection of the body and the senses mean RHYTHM! JOHN TRAVOLTA and JAMIE LEE CURTIS in a one-hundred-thousand-volt Dance Ecstasy!

→ Jamie Lee Curtis trained for several months before shooting began. All the scenes that show her leading classes were filmed first, with the narrative and dramatic sequences shot next. The last sequence filmed was the closing credits workout. It is noticeable that Curtis had lost 10 pounds of muscle since the workout scenes had been filmed. She also filmed a music video with Jermaine Jackson to promote the movie.