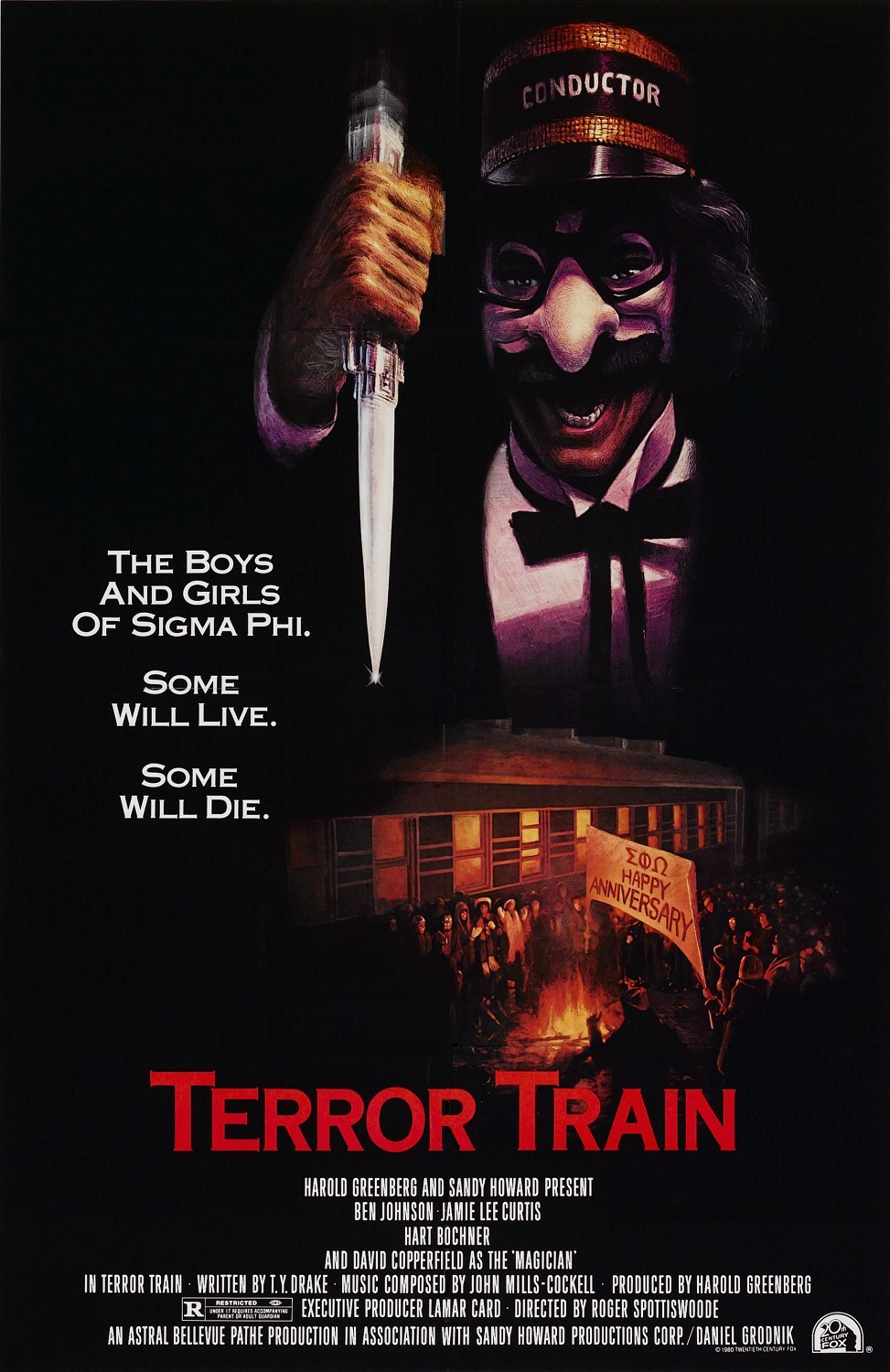 Three years after a prank went terribly awry, the six college students responsible are targeted by a masked killer at a New Year's Eve party aboard a moving train.

At a Northern Illinois University fraternity’s New Year’s Eve party, a reluctant Alana Maxwell is coerced into participating in a prank: she lures the shy and awkward pledge Kenny Hampson into a darkened room on the promise of a sexual liaison. However, some other students have placed a woman’s corpse (stolen from the university medical school during the Christmas vacation) in the bed instead. Kenny is traumatized by the prank and is sent to a psychiatric hospital.

Ed is murdered prior to boarding and the killer dresses himself in Ed’s Groucho Marx mask, allowing him to board the train unnoticed. As the train journeys into the wilderness, the killer wanders amongst the students, who believe him to be Ed. In the sleeper bathroom, he murders Jackson by smashing his head into a mirror. Carne finds Jackson’s bloodied body in the bathroom, still donning the lizard costume. When Carne returns to the scene with the brakeman Charlie, the killer has hidden Jackson’s body and is now posing in the lizard costume; as he appears conscious, Charlie assures Carne that the partygoer is merely drunk.

Mitchy goes with the killer, whom she believes to be Jackson, to a compartment where she attempts to seduce him. As she closes her eyes, he caresses her with Jackson’s severed hand before murdering her. Carne subsequently finds her corpse in the compartment with her throat slashed. Alana stumbles upon the scene, and Carne informs her that Mitchy is dead. During a magic show held by the magician and his female assistant, Doc finds Mo bleeding, though the partying onlookers assume the scene to be a prank. Carne and Charlie stop the train and they sequester the students in one car; while doing so, two pullman porters find the corpse of Pet, another student.

Suspecting Kenny may be involved, Alana recalls the prank to Doc, and recounts her attempt to visit Kenny at the psychiatric hospital, where she learned that Kenny may have been involved in a murder before the prank. Doc subsequently seals himself inside a room in the sleeper car where the killer is hiding, and is murdered; shortly after, Alana and Carne find his decapitated body. Believing the magician may be Kenny in disguise, Alana notifies Carne, who goes to lock him inside the parlor car; there he finds the magician’s female assistant, but Carne and the porters are unable to find the magician.

Alana is sequestered in a locked compartment for her safety, which the masked killer infiltrates, killing the chief porter with one of the magician’s prop swords before arming himself with an axe. Alana is pursued through the train. While in-between cars, she manages to push the killer overboard, unaware that he has managed to hold on below. Later, after finding the magician’s dead body in his sword box, Alana runs through the train car and finds Charlie in the baggage car seated with his head resting in his hands. She tells him the magician is dead, and lays her head on the table, when he grabs her by her wrists. Alana realizes it is Kenny, who is indeed the killer, dressed in Charlie’s uniform. Kenny removes the uniform cap to reveal a blonde wig, and Alana realizes he has been posing in drag as the magician’s female assistant.

Alana apologizes to Kenny about the prank, but he refuses to accept her apology and forces her to kiss him; the kiss causes Kenny to relive his memories from the prank and drives him deeper into insanity. Carne rushes to the scene and beats Kenny with a shovel, causing him to fall out the open door of the baggage car to his death. His body lands in a nearly frozen river and floats away as the train roars off.

• Experience the most terrifying ride of your life on the Terror Train.
• The boys and girls of Sigma Phi. Some will live. Some will die.
• Don’t waste money on a return fare. You won’t be coming back!
• A nightmare journey to hell… All aboard… if you dare!
• Terror wears many disguises… All of them deadly!

→ Actress Jamie Lee Curtis once said of her character in this film: “There are certain things a heroine in a thriller has to be. She has to be vulnerable, so that the audience identifies with her and is rooting for her. But she also has to have an enormous inner strength to overcome the evil, or terror, that is pursuing her. I play the same kind of character as I did in other films. But Alana – the girl I play – is stronger and more defined.”

♦ [Referring to the killer] Jesus, I don’t know who it is anymore!